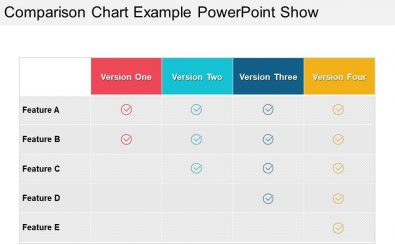 When looking to compare various features of any item, any subject, or any operation, Microsoft Excel Templates has given us free Excel templates to be used for day to day comparison of various parts. With such chart templates can you rank each feature of the item and even take notes. While this may seem easy, it would do well to review the components of the comparison chart template given to us from Microsoft Excel Templates.

How To Use the Comparison Chart Template

When it comes to using Microsoft Excel spreadsheet templates, at the outset you will notice to the upper left column is a box that reads Comparison List, this is to let you know what template you have before you. Underneath the comparison list box is a few columns each with a title. To the left is subject/item, this column will identify the subject or items that are being compared. You will see item one, item two, item three, and item four in succession. Of course, there can be more items listed, as these are only to serve as an example. The next column is headed with Feature One underneath this feature you will see four distinct columns that read Description. The next two columns subsequently are feature 2 and feature 3. Be it known that if the particular item of study has more than three features you can adjust and add as many features as possible. The next column on the comparison chart template is titled Rank. In this column is where you would rank each distinct feature for the items of study. The last column is titled notes. Upon ranking and describing the features of the particular item or subject that is being compared, you have the ability to write notes to describe findings or to make relevant information notated on the comparison chart template.

Excel spreadsheet templates serve as a wonderful tool when there is a need to compare different items. With this brief description of the comparison list given to us by free Excel templates, you would do well to realize that each wording in the template can be replaced with your own individual words. So where you see subject/item that will stay the same but underneath where it reads item one will you type the name of the first item. The same rule goes with two, three, and four. Underneath feature one is the word description, this can be changed to an individual description of item one. Microsoft Excel templates allow you the flexibility to change the template to match what you are comparing.

Features of the Comparison Chart Template

With Excel spreadsheet templates comes some very notable features, one such feature is the ability to describe individual features of any given item and rank them in order of importance to you. What makes this such an attribute is that being able to compare between things is only how do we come to the sum total of which is more valuable than the other. So if a corporation wanted to compare two operational devices to know which would give the highest output, with Excel chart templates, can such answer be given.
There is the ability to map out each individual item, in this case, it would be the two devices. Next would be the first feature of both items will be listed along with other features. Ranking them will be a lot easier once the features are described in detail. Notes can then be developed as to which device will be the better. If the decision is to be based on production and output then the features described will be able to distinguish between the two devices on which would be more feasible to ramp up production and output. Another awesome feature of free Excel templates is the ability to translate the comparison list into downloadable chart templates that can be either printed or save in a PDF format to be shared amongst team members or employees. Having a Microsoft account that is synced to all electronic devices will give developers or management the ability to view the comparison list. Whether on a smartphone, tablet, or desktop PC. Oftentimes by deep reflection with Excel chart templates can we come to generalized conclusions when making comparisons. Being able to color code the comparison list is also another great feature of chart templates. Each column can be given a distinct color. So each feature can be given an individual color two separate between the items. The ranking also can be given its own color as well and this is just the beginning because the more data is entered, the more vast are the colors. Color combined with charts provide visual stimulation of the learning faculties. In this case, it is learning the differences between listed items. This is just one additional feature that Microsoft has given the world of analytics and statistics.

An optional tip to the user of Excel chart templates would be to analyze importance among different departments of the company. For instance, if there are multiple departments within a business and the question arises as to which department is more vital than the rest, this is the perfect scenario for a Microsoft Excel comparison chart list template. Knowing each department is where you would list up under subject front/item. The first feature of each department would be what stands out about that particular department. Be it sales, customer service, technical support, or event management. Listing the first feature will lead the way for additional features of each department. Ranking them will be easy once the overall goal for the comparison chart is ascertained to be that of value. The notes that can be taken for such a chart will lean towards just what makes this particular group within the business more valuable as opposed to the rest. By having the Microsoft comparison chart list before you, you now have the ability to look at each distinct part in its entirety, independent of all others, in order to draw a conclusion on its individual value to the whole.

In conclusion, having a comparison list will lead to some interesting information within a company or even within a small group. As being flexible in his nature, the comparison list can be used for many purposes and many intents. Results come forth once the information is entered and reflected upon. By utilizing Microsoft comparison list will you discover distinct qualities. These are just a few of the wonderful ways to utilize such a phenomenon tool in the world of analytics today. Many more ways will be developed with practice and use.